Earlier this year, Ecotone finalised its journey towards SAP BW/4HANA with the help of Expertum. In this blog, Expertum BW expert Erik Delpeut reflects on this joint project and highlights the considerations, lessons learned and the outcomes of the migration.

Let’s introduce Ecotone first: the company is a leader of organic and sustainable food in Europe. Their production facilities are located all over the continent, and they cover a large range of products such as tea, coffee, dairy alternatives, meals and snacks. Some brands might be familiar to you, either from your local supermarket or from grocery shopping abroad; think of Bjorg, Clipper, Abbot Kinney’s or Zonnatura.

Moving on to Ecotone’s BI landscape which originated from 2008, you can see an overview of it in the image below. Over the years, an SQL-layer was built on top of their SAP BW system, providing dashboard-like reports in Excel. Apart from that, about seven-hundred BEx Analyzer reports for more detailed analytical reporting were built directly on top of BW. 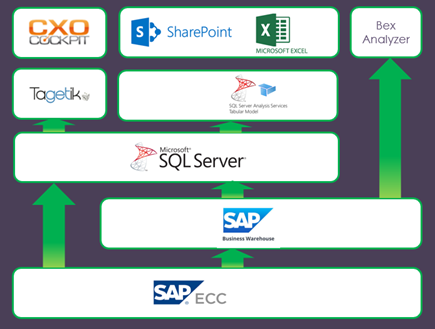 The SQL-layer became a thorn in the side of Ecotone; redundancy of data, bad tooling for data load-monitoring and dependency on DAX programming expertise were unwanted outcomes of the current situation. As more and more non-SAP systems (both data providing-and- consuming in nature) entered the BI-landscape, the need for more advanced connectivity and virtualization options arose. Additionally, increasingly complex reporting needs started to cause sophisticated data-preparation scenarios and front-end calculations. This development put big pressure on the data loading processes and reporting performance. All in all, good arguments for a renewal of both front-end and back-end systems.It was clear from the beginning that a complete replacement of the BW system, which was built over many years, was not an option: from a functional point of view the reporting was too valuable and the knowledge of the internal BI-team too vast. The choice for the combination of SAP BW/4HANA (BW/4) with SAP Analytics Cloud (SAC) as well as SAP Analysis for Office (AfO) seemed logical; the HANA-engine of BW/4 and the AMDP procedures would tackle the existing performance issues. Moreover, both SAC and AFO, working seamlessly with the backend system (via live connection), would provide a modern visualization experience.

In a nutshell, the BW/4HANA In-Place conversion path was as follows:

What did we learn and how could we improve?

Looking back at the journey, there are quite some lessons that we learned. Perhaps chief among them is that the migration path took longer to complete than we initially expected. The main reason for this was that the daily course of business also had to take place, in spite of all the project activities that were going on. A period of, let’s say two months, in which no new developments would take place and in which the team could focus on the migration job would have my preference. A project like this always hurts a bit, so it’s better to make it as short as possible.The next lesson learned would be to let the Tasklists do their job: Tasklist RS_COMPATIBILITY_TO_B4H for example, deletes a lot of incompatible objects we didn’t have to do manually. Also, you will run into issues when converting objects and you will (in most cases) need to perform these activities in a complete DTAP-street, so extensive documentation is very useful. For us, having all data sources migrated to ODP cleared the road to a smooth SAP S/4HANA migration as well, so this is something you might want to keep in mind if you find yourself or your customer in a similar situation.Another point that really demands attention is the MM Inventory Management model. It can easily be impacted by your implementation project. We decided to rebuild the complete flow according to standard best practices in advance of the migration; It’s working like a charm now.Finally; even before officially starting a migration project, you can already think about basic topics such as the cleaning of the system or alternatives for your APD’s. Considering the conversion of 3.x objects, such as 3.x-DataSources, InfoSources and Update Rules, is also an easy win if done in advance. Start thinking about the conversion to new BW/4-objects as well, or maybe even start building already if possible.So, how does Ecotone perceive their new BI-landscape after six months of operational use? Post-migration performance is stellar, and the customer could not be happier with the result. In the end, that is the final and only goal.

We're here to listen.
Get in touch with us.

In spite of no lack of turbulent events this year, 2022 has been the time for many of us to mostly return to the way we lived our lives before the COVID...
News Nov 21, 2022

In my previous Blog (Part 1) the possible transition strategies from SAP HCM to HCM for SAP S/4HANA and SAP SuccessFactors were explained. In this blog I...
Technology Nov 9, 2022

The switch to standard time or winter time in SAP

For most humans, the switch to standard time just means an extra hour of sleep. But for software applications, the consequences are less appealing. Software...
Technology Oct 25, 2022

This blog describes how to set up inbound communication using Basic Authentication when using SAP Cloud Integration in the Cloud Foundry environment, as this...
Technology Sep 12, 2022

What Is it Like Being an SAP HANA Database Administrator?

In this post, let’s discuss the day-to-day tasks of an SAP HANA database administrator and how to get yourself started down that career path. What does an
SAP HANA Aug 29, 2022
Visit our blog

Stay informed, our insights directly to your inbox.