In our upcoming Expert Session we will present the Conversion Guide, by taking you with us on an SAP S/4HANA flight. Our latest book is your guide to SAP S/4HANA and includes everything you need to know to get you to your destination, SAP S/4HANA!

SAP Released R/3 back in ‘92. Although SAP R/3 has been renamed several times for marketing reasons, the core remained the same. The latest version SAP ERP EHP8, is a still successor of SAP R/3. True, SAP added a lot of functionalities as time went by. But anyone working with SAP R/3 in '92, will still recognize the look and feel in the latest release of SAP ERP. This changed with the release of SAP S/4HANA.

SAP S/4HANA is a completely new product thanks to the principle-of-one and simplification. Migrating from SAP R/3 or SAP ERP to SAP S/4HANA is not just another release upgrade, it is a system conversion. Except for those who migrated from R/2 to R/3, the conversion to SAP S/4HANA is for most companies their first migration, ever. Executing such a conversion can be very overwhelming. We therefore published the SAP S/4HANA Conversion Guide together with SAP-PRESS to help companies to plan and execute their migration.

Why did we write this book? Which criteria did we use to establish our table of content? What did we consider important enough to be included and what not?

Join this expert session to get an exclusive preview and a free copy of the book!

Who is this session for?

This session highlights the important aspects to take into account when launching a conversion project. The session is a must for administrators and technical consultants preparing for or participating in an SAP S/4HANA system conversion. If you’re a developer working on converting code, a functional consultant working to adapt data and convert business processes, or a product manager in charge of keeping all the logistics of the conversion in check, you’ll also find this session beneficial.

Food & drinks, experts and a great atmosphere included on this flight! 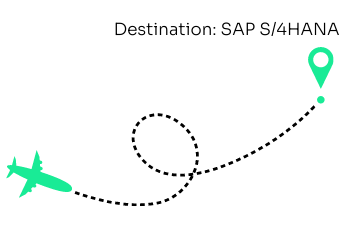 Register for this Expertum event

Stay informed, our insights directly to your inbox.